Spy Myung-wol gets an extension 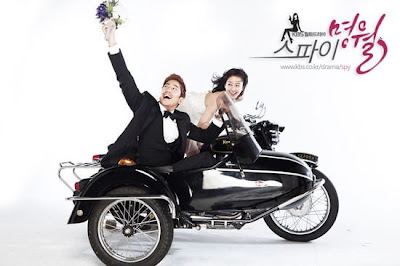 Our beautiful Spy Myung-wol couple is getting an extension, according to the awesome girls over at Dramabeans! For those who have been keeping up (like me), you know that things at the end of this week's airings heated up a lot, and news of an extension is actually something that excites me for once.

Generally speaking, extensions make me cringe. There are few (if any) times when they do anything good for a show, and often enough, the extra episodes make a good show fall flat at the end (think Coffee Prince).

In this case, sources claim that Myung-wol was always meant to have 18 episodes and the actors are even signed on to do 20. I don't know if that's just PR cover-up or what, but I'm actually excited. This is good for Myung-wol (I hope) as well as the much-beleaguered Poseidon production, which will get some extra filming time.

Whatever the reason for the extension, we know one thing for sure: it's not because of the ratings. Myung-wol has done awful, ratings-wise--not as awful as Playful Kiss, but still stuck in the single digits through its first ten episodes--forced to compete against sageuks Warrior Baek Dong-soo and Kye Baek, the spy rom com had problems getting off the ground from the beginning.

We'll have to see how they pull off this not-really-an-extension extension, but my hope is that things won't crash and burn too badly.

Spy Myung-wol will air until September 6, and Poseidon will premiere on September 19.