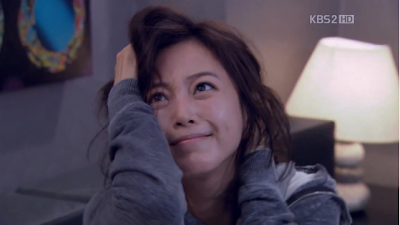 Ahh, the funnies just keep a'comin. I'm beginning to love this show already. Let's just hope it doesn't take a nosedive off the deep end anytime soon. The end of the first week in Myung-wol world brought us lots of laughs and set things up for the real plot to begin.

Episode 2 Mini-recap
We begin the episode right where we left off: Kang-woo hiding in the sassy spy's bed. He thanks her and mentions that her hospital bills have been paid for, but that she shouldn't expect anything more.

Hee-bok steals his way into the hospital Mission: Impossible-style, and confronts Myung-wol about her roguish behavior. Apparently, invading the south without reason is punishable by death. Sensing trouble, Myung-wol quickly lies that she came to South Korea to kill Kang-woo. It's only after Hee-bok accepts the story and leaves that she realizes she acted without thinking again. She didn't really mean to say she'd kill Kang-woo. 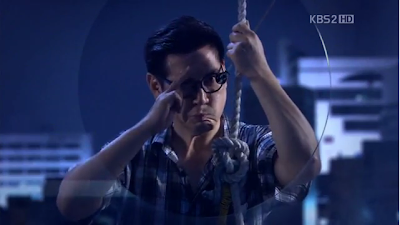 ﻿
Myung-wol immediately attempts to jump out the window after Hee-bok but gets stopped by the guards posted outside by Kang-woo's manager. Hee-bok sends his message to the North Korean HQ, only the DJ (they send messages through the radio) changes his spiel at the last minute and the message is decoded wrongly, with "Eliminate" becoming "Picture." The North assumes Myung-wol went to the south to "take a picture with Kang-woo." Oops. The general who had Myung-wol accompany his daughter to Singapore orders Ryu to eliminate her.

Hee-bok makes another trip to the hospital and warns Myung-wol about the decoding mix-up. Someone will soon be arriving to kill her. He leaves her with Kang-woo's current whereabouts and peaces out.

In the meantime, Kang-woo meets up with Chairman Joo who's been backing him financially for the last five years. Joo asks Kang-woo about the book he bought in Singapore, but Kang-woo brushes it off as nothing important. Hmm… 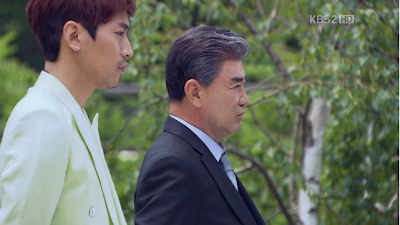 Myung-wol manages to escape from the hospital and goes to a DVD room to watch old Kang-woo movies. As she's re-bandaging herself, she finds a tracker placed by Hee-bok. Deciding that the best move would be just to find the damn book and get the hell out of there, she heads to Kang-woo's place.

As she searches, Myung-wol doesn't find the book, and instead gets caught hanging off the roof of his house by Kang-woo himself. He helps her up, but she passes out from the pain of her injury.

Myung-wol wakes up in his bed and listens to him spout a lengthy spiel about why he has no reason to notice her: she's only a high school student, she doesn't even come from money and her appearance is not his style. She fakes amnesia and insanity, which makes him worried and eventually scared, but disappears from his house when he goes looking for painkiller.

In Pyongdang, Ryu makes another attempt to dissuade the general from eliminating Myung-wol. As they're arguing, the corrected message from Hee-bok airs over the radio. When confronted by the other war generals, the one in charge of the Hallyu Control Squad (the same one who ordered the elimination of Myung-wol) explains that his plan all along has been to bring Kang-woo over to their side.

Ryu flies to Singapore to attend a meeting with Chairman Joo and helps out the Chairman who gets duped buying another of those ancient books. He then heads to South Korea and Hee-bok comes home  to find Ryu waiting.

Myung-wol runs into Kang-woo again, and he tells her to report her every move to him from now on, rather than just disappearing without a trace. He's not worried about her; he's just the city's youth role model so he likes to keep tabs. Pfft.

Myung-wol gets tracked down by Hee-bok and Ryu and Ryu explains her new mission: to marry Kang-woo and convince him to go back with her to the North (of his own volition). To help out in the mission, they're enlisting another sleeper agent, Ok-soon. She'll train Myung-wol to be a girly girl and seduce Kang-woo. She and Hee-bok will pose as Myung-wol's fake parents.

Ok-soon begins the training but Myung-wol epically fails and Ok-soon admits to Ryu that success in this particular mission is highly unlikely. The best option is probably just to have Myung-wol blindly confess her love to Kang-woo.

On set the next day, In-ah arrives to confess her own undying love to Kang-woo but gets ruthlessly shut down. Myung-wol happens to be in the wrong place at the wrong time. She confesses her love to Kang-woo, who's a little bewildered (she's crazy, what did you expect?), but when he sees In-ah watching on, he takes advantage of the situation and plants a kiss on Myung-wol. 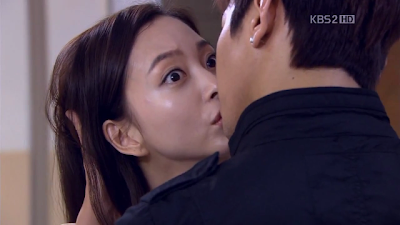 Comments
Myung-wol continues to be a fun ride as the "marry the Hallyu star" antics get underway. It's the kind of show that I have to remember not to think too much into, but it provides enough laughs and chemistry to keep me watching. And who doesn't love a show that ends the first week with a kiss?

As far as acting goes, Han Ye-seul is doing okay. She could tone down the surprised expressions a bit and try to vary her reactions. Other than that, she does well in comedic roles, so this is the perfect fit for her. Eric is… Eric, but I hope we get more Kang-woo time soon. It felt like there wasn't enough in this episode. Lee Jin-wook is the epitome of cardboard cutout right now, but I think part of that is Ryu's stoniness. And the less we get of Joo In-ah (Jang Hee-jin) the happier I'll be. She's already proving to be annoying.

Plot-wise, we're chugging along. I'm happy for the forward movement as we start into the Mission: Marry the Hallyu Star stuff, and I'm also interested to find out the significance of that ancient book everyone's trying to get a hold of.

If the story keeps plodding along like this, we'll be well-off for the rest of the series. As long as we don't get too bogged down in the Chairman Joo storyline (which proved to be the slowest moments in this episode), I think we'll be alright. 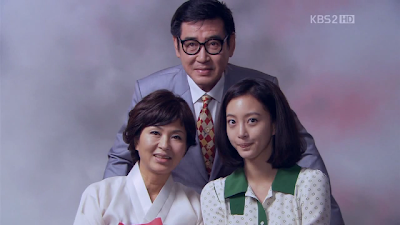 Posted by adverseffects at 1:19 AM