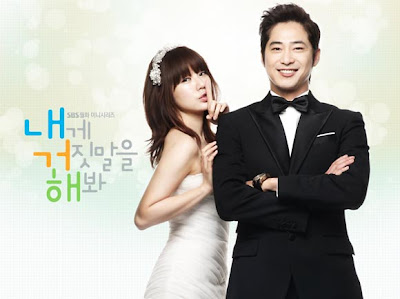 So, May ushered in the start of a new series from SBS called Lie to Me, which stars Yoon Eun-hye (Coffee Prince, Goong) and Kang Ji-hwan (Coffee House, Fireworks). Owing to the fact that this was YEH's first leading role since the disastrous Take Care of the Young Lady (a.k.a. My Fair Lady), it was highly anticipated. The beautiful star-studded cast wasn't a detriment either. I figured I should weigh in with my two cents before the show ends its run.

You can watch full episodes of Lie to Me on DramaFever!

The basic premise of LTM (moderately clumsy civil servant has accidental run-in[s] with handsome hotelier and--due to inescapable circumstances--begins a contract marriage with him) ensured a cliche-riddled rom com, but who doesn't love those, right? I don't know about you, but I wanted to watch it for one reason, and one reason only: the OTP. And let me just say, they've been the only thing keeping a sinking ship afloat. 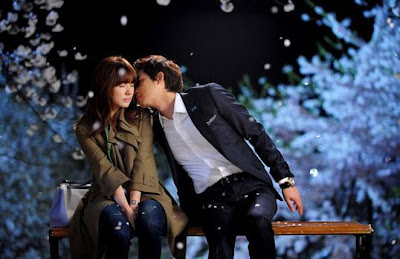 To be completely honest, I've only watched episodes in pieces after the first week. I love YEH as much as the next person, but this mess of a show needs a lot more than just her to bring it back into my good graces. Maybe it was the annoying pseudo-friend, So-ran (played by Hong Soo-hyun of Temptation of an Angel fame), or the lack of a solid plot with actual conflict (other than, "Neener neener, So-ran. I married a chaebol. Who did you marry? My first love? A cheater? Sucks to be you."), or maybe it was the sheer number of cliches (hard-working girl meets a cold, jaded chaebol; contract marriage; disapproving family; antagonizing, boyfriend-stealing tramp of a best friend; messy past breakup which is why the chaebol is so jaded... shall I go on?). In any case, I couldn't get through the next few episodes.

Then what about the quintessential second leads? In LTM, these come in the form of Hyun Ki-joon's baby bro, Hyun Sang-hee (played by Sung Joon) and their mutual (ex-)love Oh Yoon-joo (Jo Yoon-hee). I have to say, if Ah-jung and So-ran's characters left a strong impression, these two didn't leave much of an impression at all. The only thing I can say is that there's very little (if any at all) reason for Hyun Ki-joon to be with (or not be with) Yoon-joo. Basically, I couldn't care less what happens between them in the interim, so long as Ah-jung and Ki-joon end up together. That says a lot about the lack of screen presence of Jo Yoon-hee. One thing to note, however, is that I like Ah-jung's friendship with Sang-hee, even if it's on the cliched side a bit. Their squabbles and back-and-forths are worth the watch (unlike, say, the love triangle between Ah-jung's dad, Ae-kyung and Suk-bong).

So, the plot is... meh, the characters are pretty much stereotypical cardboard cut-out caricatures and the execution of it all leaves much to be desired.

After all this, why am I still watching? Or... rather, why did I decide to pick it back up? A little thing called chemistry. It's almost literally the only reason I keep coming back. And believe you me, chemistry is not in short supply in this drama. 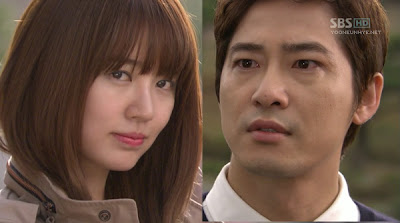 The on-screen electricity between YEH and Kang Ji-hwan is palpable in their scenes together. If nothing else, I am rooting for Gong Ah-jung and Hyun Ki-joon to get their shit straight and have a happy ending.

Predictability, mediocre writing and lack of substance aside, the main couple (and all their moments of happy fluff time together--skinship ftw!) melts even the coldest of hearts.

So, as much as I hate to say this, I'll have to keep an eye out for Lie to Me during the rest of its 16-episode run, in the hopes that the plot takes a turn for the better (or maybe, a black hole will send our characters hurling into outer space--hey, it can only help at this point). 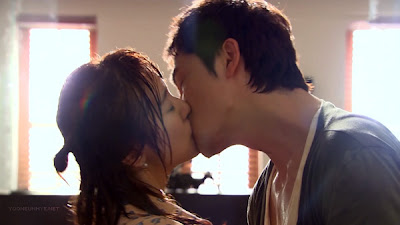 
If you need affirmation of this theory, check out the video below. Remember, Kang Ji-hwan plays a stick-in-the-mud hotelier. Would you believe it from the beginning of the scene?

[Photos are not my own screenshots. Photo credit goes to SBS, YouTube, yooneunhye.net and the various sites responsible for the screen captures.]
Posted by adverseffects at 3:07 AM