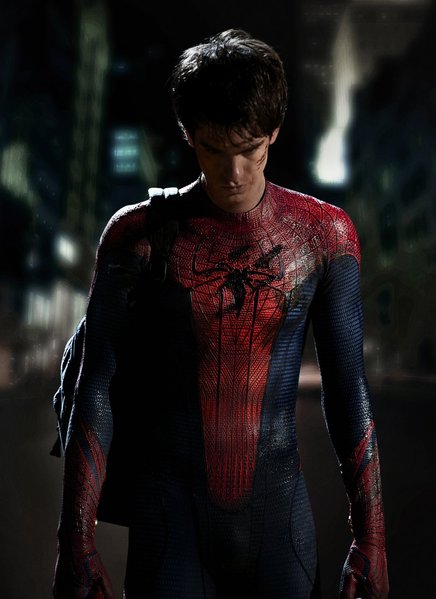 So, Tobey Maguire fell a little short of my ideal Spider-man, yah know? I was one of those people that never found him very attractive, and thought he looked a bit goofy playing nerdy Peter Parker. That's why, when it came out that the entire Spider-Man franchise was getting a reboot, I got really excited. And the fact that Andrew Garfield (The Social Network, The Imaginarium of Doctor Parnassus) got the title role made it even more exciting.

To be fair, I didn't think much of Garfield when I saw him in Doctor Parnassus, other than the requisite, "Hey, that kid's sorta cute... wonder who he is?" He didn't make much of an impression until The Social Network, in which he got to exercise his acting chops a bit more. Then, it was love at first substantial sight.

So, to find out that the same Andrew Garfield from The Social Network would be starring as the lead of a franchise that, in my opinion, fell a bit flat the first go around, was good news at the very least.

Then, come to find out that not only is Andrew Garfield starring in the reboot, but also brilliant comedienne Emma Stone (Easy A, Crazy, Stupid, Love.).

This movie could turn out to be the worst movie ever made (doubtful, considering Steve Kloves [the Harry Potter series] is writing the screenplay), and I'd probably still rave about it.

Anyway, getting back on track... the revamp takes us back to Peter's high school days, before Mary Jane Watson became the love of his life, when our resident superhero was just starting to find himself. The movie chronicles Peter's discovery of his powers, while dealing with the pangs of first love in the form of smartypants Gwen Stacy. The movie's villain will be Proto-Goblin, played by Irrfan Khan (Slumdog Millionaire), whose alter-ego is Nels Van Adder.

Clearly, the idea is that this revamp will, in effect, "re-do" the Spider-Man/Peter Parker story in a way that involves new characters and new angles. I'm more than alright with that, considering all the shortcomings of the original series.

The project has been under wraps for the most part, with little to no spoilers or previews becoming available until last week, when the first teaser trailer was released. It didn't disappoint. Compared to others that were released recently (Dark Knight Rises) the The Amazing Spider-Man trailer provided a lot more information. Keep in mind, there's still a lot of time for them to release more spoilers, but this trailer certainly whet my appetite. Take a look below, and let me know what you think of it.

The Amazing Spider-Man opens in theaters on July 3, 2012.

[Photo creds to Poptower.com and video creds to YouTube]
Posted by adverseffects at 12:49 AM