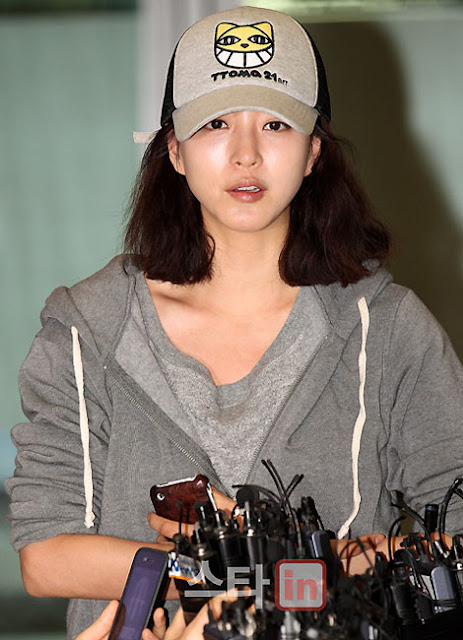 So, last we heard, Han Ye-seul had safely arrived in Los Angeles just as her mother landed at Incheon International Airport in Korea. Since then, the Spy Myung-wol Saga, as I have dubbed it, has concluded on a gratifying note for all those involved, including the actress herself.

It seems like just yesterday that Lee Kim Productions, teaming up with Sidus HQ and KBS, released a statement that they would be suing actress Han Ye-seul to the tune of some $10 million. Oh wait. It was just yesterday, wasn't it? The SMW Saga feels like it's been in the news for weeks.

Anyway, Lee Kim released their statement and Han's mother arrived in Korea. Realizing the turmoil she'd left behind, Han turned around and boarded a return flight back, with a promise to return to the Spy Myung-wol set by the 17th.

Han Ye-seul managed to safely return to Korea and made a tearful apology to the media upon her arrival. Following this impromptu statement, an official one was released by Sidus HQ on the actress's behalf.

Somewhere in between these milestones, Han's stylist went public about the harsh working conditions on set, and Eric tweeted his own version of the story.

It seems things turned out well in the end, after all. The atmosphere on set is bound to be awkward for everyone, but hopefully that won't affect the quality of the show. As far as Han Ye-seul's actions go, I'm going to stay neutral even now. She's likely being condemned by the entire Korean entertainment industry, so there's no sense in adding salt to that wound, especially when she realizes the weight of what she's done. Similarly, there's nothing about her actions that should be commended, regardless of her attempt to voice her protest about bad working conditions. A lot of grief was dealt to everyone else working on the show.

Let's hope Spy Myung-wol manages to finish its run smoothly from here on out.