Yay! The world didn't end (yet) and I'm here with a review.

If you've spent much time following my blog, you probably know that I'm averse to melodramas. Even so, every now and again, a melo will catch my eye and dig its little claws into me until I finally sit down to watch it. There are very few instances in which I come out of a melodrama satisfied because, let's face it, the makjang elements make us roll our eyes more often than not. It's even rarer for me to find one I truly like, but somehow Kingyo Club and its small cast of (relative) newbies managed to do that.

Overview and Personal Thoughts
Kingyo Club is a sad, sweet drama that encapsulates the idea of overcoming adolescent hardships through friendship, and it's certainly worth a watch. It's brutally honest, and unflinching in its depiction of bullying. The child actress playing the female lead, Kariya Yuiko, who was only 15 years old at the time of the drama's airing, does a breathtaking job in her role as Harukawa Koto. Her counterpart, 18-year-old Irie Jingi, is in similar standing, and together they make the drama come off the screen. It's hard to describe my love for this short series, but it more or less mirrors my devotion to Nobuta wo Produce, but it's so much more real and has so much heart. I haven't seen a J-dorama yet that was this genuine in its depiction. There are certainly no frills, which makes it all the more better. It's sincere. It's organic. 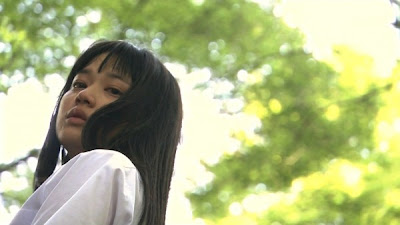 Here's quick rundown of the premise:
Hiiragi Haru is an apathetic third year in high school. Despite being popular among his classmates (particularly the girls), he's not interested in studying or love. He has no plans for the future and goes through his days sleeping in class and ignoring his peers for the most part. On the other end of the spectrum is Harukawa Koto, a first year who, as the result of an unfortunate family background, is the target of bullying at school. One day, Haru spots Koto being bullied and something about the sight stirs him to intervene. Thus begins this unlikely friendship. To get away from the harshness of the rest of the world, the pair creates a two-man after school club, the Kingyo Club as their safe haven. Yet in spite of finding a place to belong, outside forces continue to hinder their path toward living a peaceful high school life.

Characters
Kingyo Club, as I said, is by all rights a melodrama. But what tripped me up and made me look twice was the sheer caliber of the acting. The story is pretty self-contained and revolves around the two main characters of Haru and Koto. I considered everyone else in the story to be reacting to these two, so they're the only ones who concerned me. Still, despite the show's short running time, there were a bevy of named (and sometimes unnamed) supporting characters, like Haru's friends, who rounded out the story. They were surprisingly well written for getting such limited screen time. 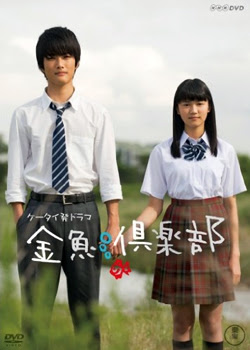 Hiiragi Haru: As the unconcerned Haru Senpai, Irie Jingi did a stellar job. You know right off the bat that there's a concrete reason for why he is the way he is and that only something like Koto being bullied can shake him out of his stupor. I think a lot of credit can be given to the directing for how organic the show felt, but it was Irie's acting that made it come truly alive. His raw emotion at seeing Koto's pain was heartbreaking and made the story feel real.

Harukawa Koto: Even more so, however, the credit goes to newbie actress Kariya Yuiko for her turn as Koto. Gosh did this little girl make me cry like a baby or what. You just feel so bad for her, and there was really no separation for me between the character and the actress. Her acting never pulled me out of any particular scene nor did it make me feel like I was watching a drama. I've likened her before as being in the same league as Shida Mirai, and I hold fast to that assessment even now. This is one talented actress, even at this young age, who does the roughness of melodrama incredibly well.

Plot and Pacing
At under 20 minutes per episode and only 10 episodes in its entirety, it's an easy watch. One that I finished in between studying for an exam, but could feasibly be finished in a few hours if I'd had time to sit down and marathon it. My only complaint, of course, is that it may be a little too short. The good thing, however, is that the story was narrow enough that every aspect of it got proper attention and nothing felt like it was done in broad strokes, which is important for such a character-based plot. 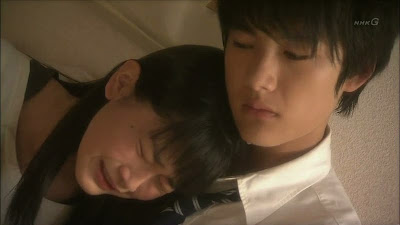 Soundtrack
There's not much to be said of the soundtrack. I don't remember any songs in particular that can be linked with the drama, but that's not really why I was watching it. This show isn't about the music so much as it is about the story.

Wardrobe
The kids were in their school uniforms for about 90% of the drama, so wardrobe isn't something that can be judged, really. Even so, their makeup and hair and everything was appropriately simple and so were their casual clothes.

Cinematography/Sets and Scenery
The cinematography was one of the best things about Kingyo Club. It wasn't fancy or memorable for its pizzazz. It was as raw and natural as the acting and story. I read somewhere that someone recommended Sprout for viewers who liked Kingyo Club, and I agree. The cinematography is really reminiscent of Sprout, with soft colors and a summer vibe. The sets were nothing to write home about, though the storage area where Haru and Koto held their Kingyo Club meetings was appropriately isolated and self-contained, just like the two characters themselves. 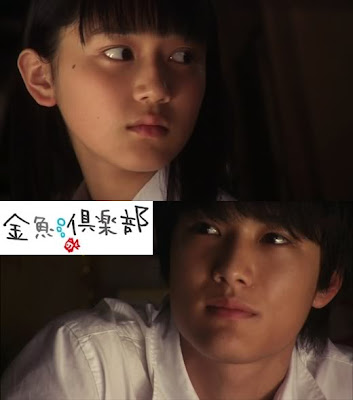 Final Thoughts
If you're short on time and looking for a sad and sweet love story with a satisfying conclusion, don't miss this. It's the length of a very long movie (about 3.5 hours, if that) but includes a solid storyline with believable characters and situations. It's about pulling through in the worst of times and not giving up, about first love in all its glory, and finding a friend who will love you unconditionally. I can't praise it enough.

Plus, it's so rare that Japan gets a melodrama right that I couldn't believe this was so good after I'd finished it. Japanese melos tend to stray into crazy territory (Innocent Love, Mitsu no Aji ~A Taste of Honey~, I'm looking at you...). When done right, however, Japanese melos can be works of art in and of themselves. This is a perfect example, as is 14 Sai no Haha, though that's more of a family drama than a melodrama. Still, when a good melo comes around, it's usually not one to miss.

Watch it For...
A short, sad, and pure high school love story that encapsulates the insecurity of first love in a less-than-ideal environment.