To the Beautiful You: Episode 9 Preview 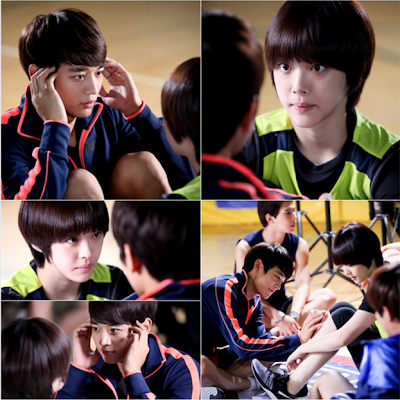 I've tended not to talk about previews and drama news lately because it's been hard for me to keep up with. Still, when I saw the preview for Episode 9 of To the Beautiful You, I squealed out loud and wanted to share.

Three things: more Jealous!Tae-joon, which is always amazing; Lee Hyun-woo got a haircut! Yay! Poor kid was really suffering with that bowl cut, but I'm hoping the new 'do isn't supposed to be an indication of a change in his character, because the Eun-gyul we've gotten til now has been fantastic; and, Jae-hee's first love shows up to throw another wrench into the machine? Yes! Bring it on.

As anyone who might be reading this blog probably knows, I've been straddling the fence trying to decide if I like this show or not. Watching this preview actually made me wish that Episode 9 had come last week to mark the halfway point rather than the mess that was Episode 8, because Episode 8 is usually supposed to be the game changer.

We didn't get anything like that (unless Eun-gyul's confession ends up being the real deal) last week, which was disappointing, and adding to that, there were too many scenes of Han-na stealing Tae-joon out from under Jae-hee's feet for me to be comfortable.

Still, this preview (as long as the whole episode backs it up) looks like this week will definitely be interesting, and heading into the second half won't be as tedious as I was previously thinking. Here's to hoping!

The recap for Episode 8 will be posted tomorrow. I'm back at home, so the internet problems are fixed for now. Just wanted to share this!

To the Beautiful You airs on SBS on Wednesdays and Thursdays, and Episode 9 is slated to premiere on September 12th.

[Video credits to SBS and YouTube; image creds to Soompi]
Posted by adverseffects at 1:07 AM