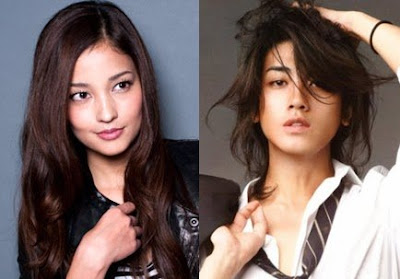 If anyone was following the saga that has been Akanishi Jin's life for the last year, you'll know that it's been a busy time for the former KAT-TUN playboy. Last year, it was announced that not only had the bad boy finally been tamed, but that he was going to become a daddy too! And not just anyone's daddy--the father of beautiful Kuroki Meisa's baby.

Not that it was much of a surprise to anyone--Jin was known for his... shall we say, philandering ways. The only question left to ask was, who'd be the girl who finally got him in trouble? Meisa, the pretty nun from 1 Pound no Fukuin seemed to land that role. Whatever the case, the pair tried to be low-key about the whole matter (pfft), even denying Meisa's pregnancy initially, but ended up tying the knot while they waited expectantly for their bun to bake.

Anyway, the (lucky?) couple gave birth to a healthy baby girl on the 23rd, and had this to say about their new bundle of joy:


"After many days and months, which have seemed to fly by, she's come into our life. We hope to work together, and supporting one another to bring up our precious, precious new love, this new life. We thank God for this amazing miracle, and hope to live together in a home that's always full of laughter."

Who can imagine Jin as a daddy? I don't know about you, but that's kind of a scary thought to me. Well, I guess one thing is for sure--that is going to be one beautiful baby. Congrats to the family! Here's to hoping we've seen the end of irresponsible Jin!