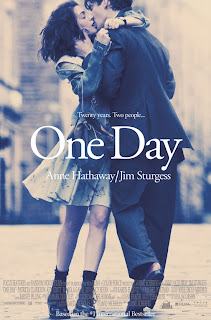 Since I started this blog, I haven't written about anything other than Korean dramas. I'm an Indian college student living in America, and I've been writing about Korea. How incredibly strange is that? So, I'm taking a moment to talk about something... relevant (to me, I guess).

I recently saw a trailer for a new Anne Hathaway and Jim Sturgess, based-on-a-book movie that's slated to come out this summer. It's called One Day.

Obviously, at this point, I have nothing to go on except the trailer (and the book), but it piqued my interest enough that I wanted to post about it.


If I can manage to get around Anne Hathaway's awful British accent (I think it's worse here than it was in Becoming Jane), then I may actually enjoy this movie. I doubt it'll be a "see at the movies" deal, but after it's out on Blu-ray, I'll go pick up a copy from Redbox.

The main reason I'm interested is probably a combination of two things: Jim Sturgess and the music. The track in the background is called Good Life by OneRepublic and I might just see the movie for that, lol.